Linear categories are one of the first sound and complete categorical models of intuitionistic linear logic proposed in Gavin Bierman’s thesis. He shows that the linear exponential, \[!A\], can be modeled as a symmetric monoidal comonad. His original definition (Definition 35 on p. 140) is as follows.

A linear category, \[\cat{C}\], consists of the following structure:

There is a lot packed into this definition, but we will expanded it in the next section.

Essentially, the simplification amounts to realizing that part b can be proven from the previous parts of the definition of a linear category, but with an additional assumption that is simpler than part b. The expanded simplified definition is as follows.

A linear category, \[\cat{A}\], consists of the following structure:

All of the structure in the previous definition except for the last bullet corresponds to part 1 and part 2.a of the original definition of a linear category. The last bullet is a simplification of part 2.b. We now show that we can prove part 2.b from the assumptions in this simplified definition.

Whenever \[f : (!A,\delta_A) \mto (!B,\delta_B)\] is a coalgebra morphism between free coalgebras, then it is also a comonoid morphism. 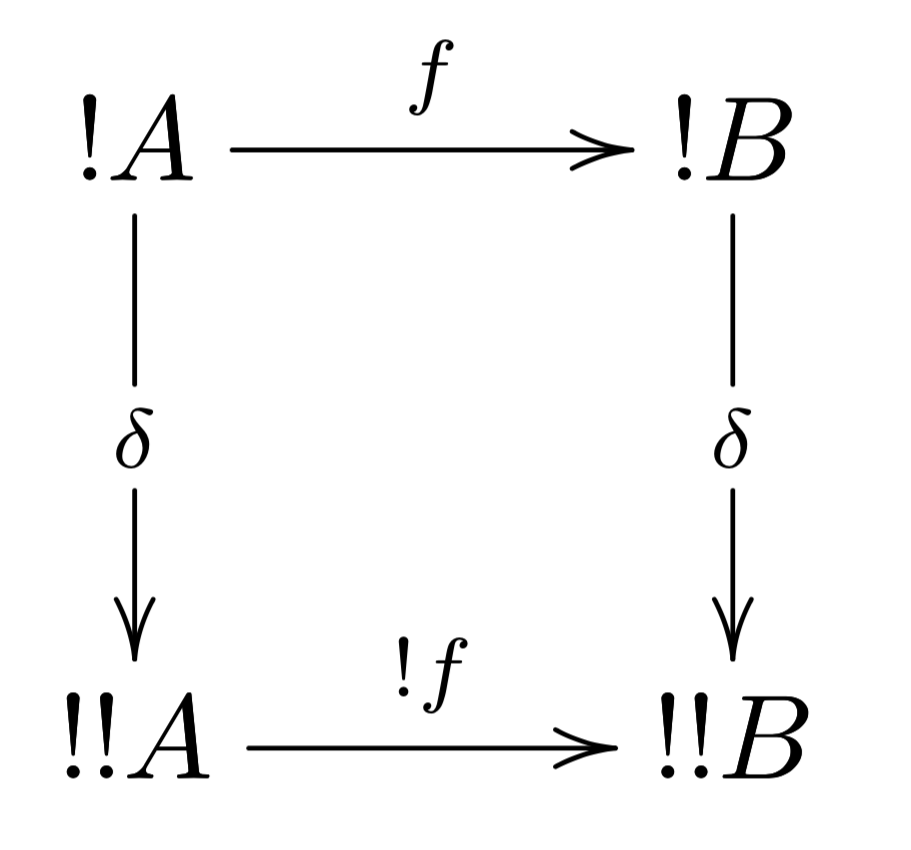 It suffices to show that \[f : (!A,\delta_A) \mto (!B,\delta_B)\] is also a comonoid morphism. Hence, we must show that the following diagrams commute:

The left diagram commutes, because the following expanded one does: 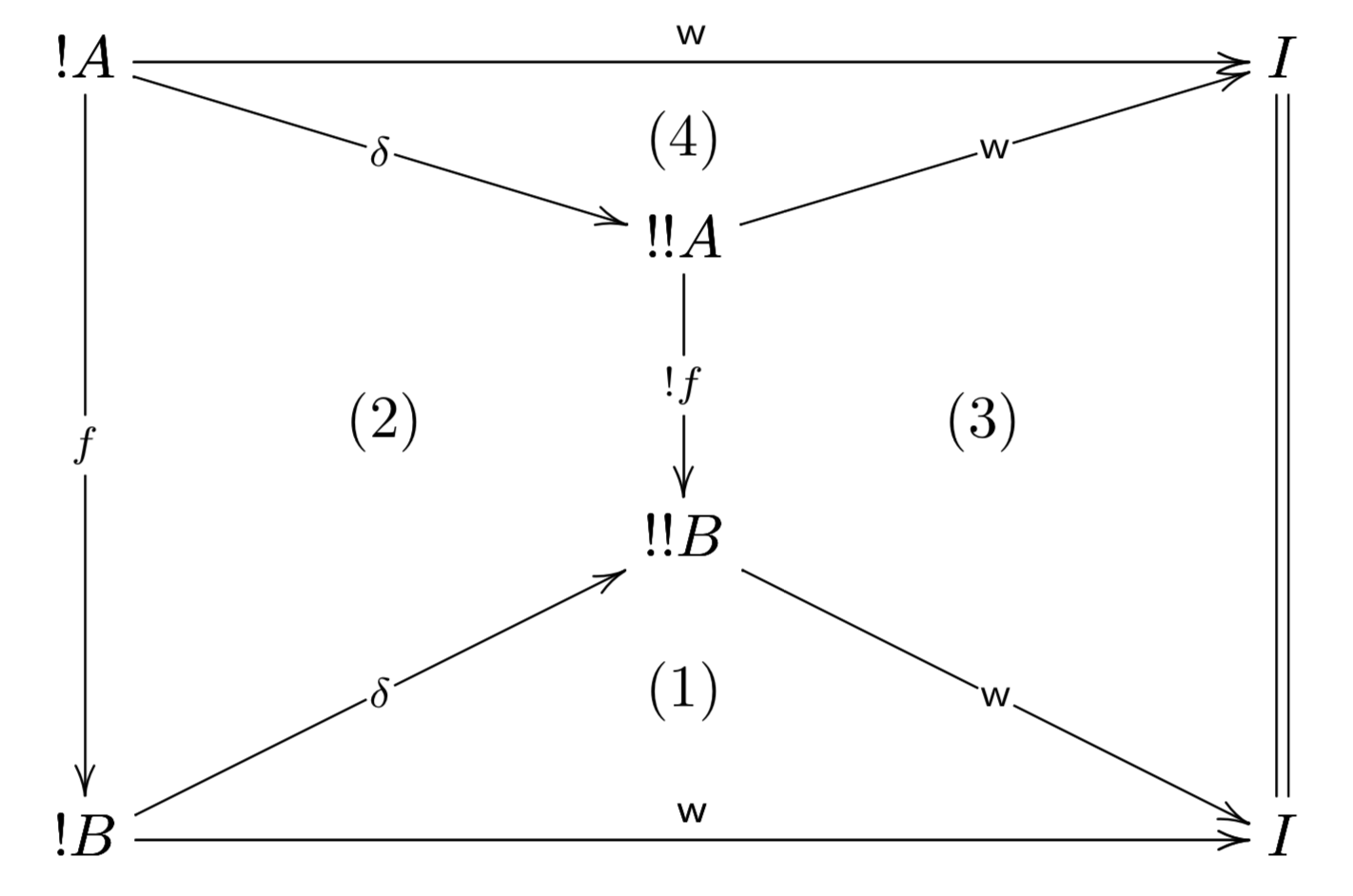 Diagrams \[(1)\] and \[(4)\] commute because \[\delta\] is a comonoid morphism, diagram \[(2)\] commutes because \[f\] is assumed to be a coalgebra morphism, and diagram \[(3)\] commutes by naturality of \[\w\]. Note that we have numbered the previous diagram in the order of the necessary replacements needed when doing the same proof equationally, and we do the same for the next diagram. This should make it easier to reconstruct the proof.

The diagram for contraction commutes (the diagram on the right above), because the following expanded one does: 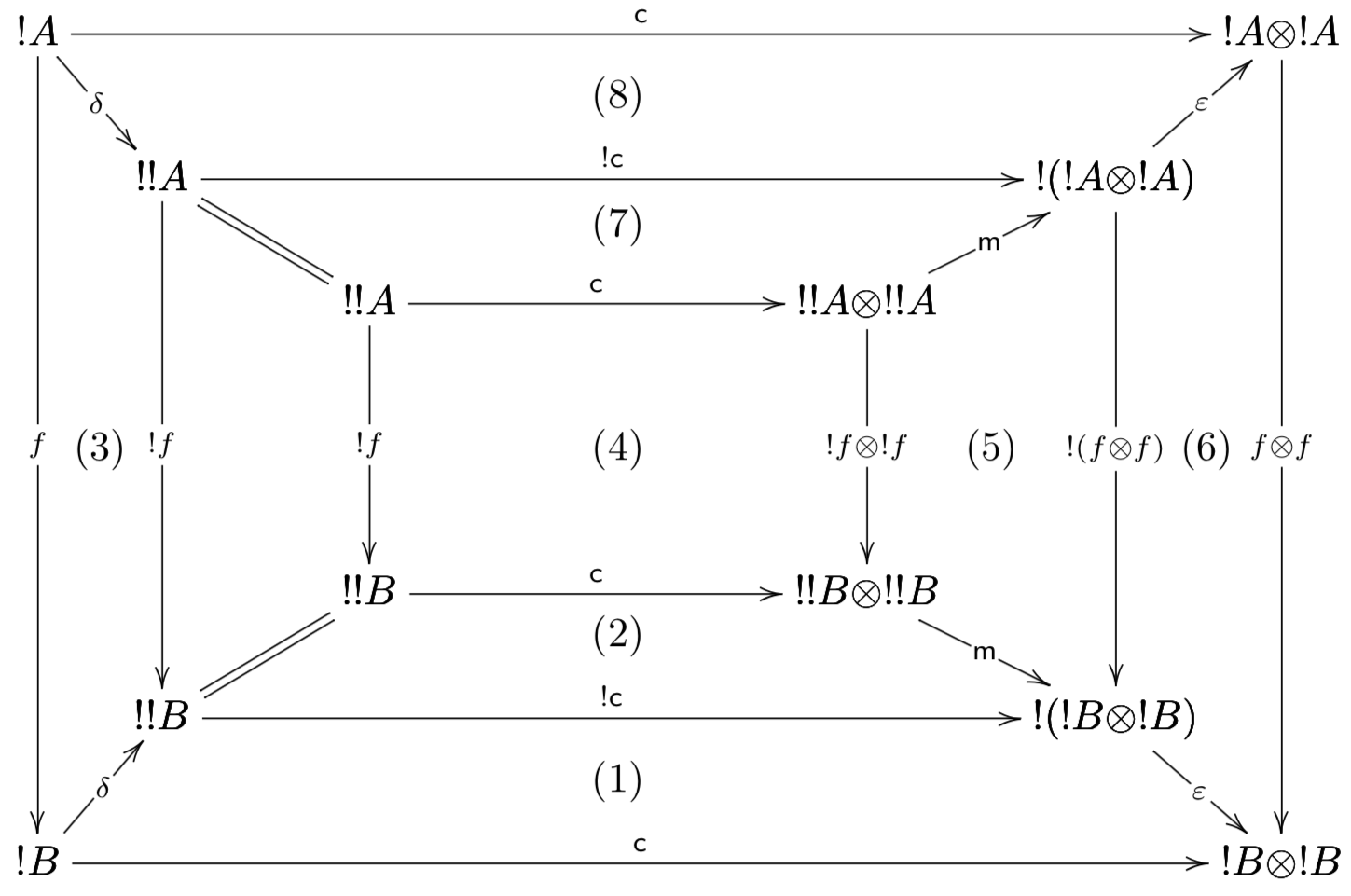 The left triangle commutes, because \[! : \cat{A} \mto \cat{A}\] is a comonad, and the bottom diagram commutes by naturality of \[\varepsilon\].

Finally, diagrams \[(2)\] and \[(7)\] do not actually commute, but are parallel morphisms whose cofork is \[\delta\]. That is, the following diagram commutes:

Therefore, the original diagram above corresponds to the following equational proof: 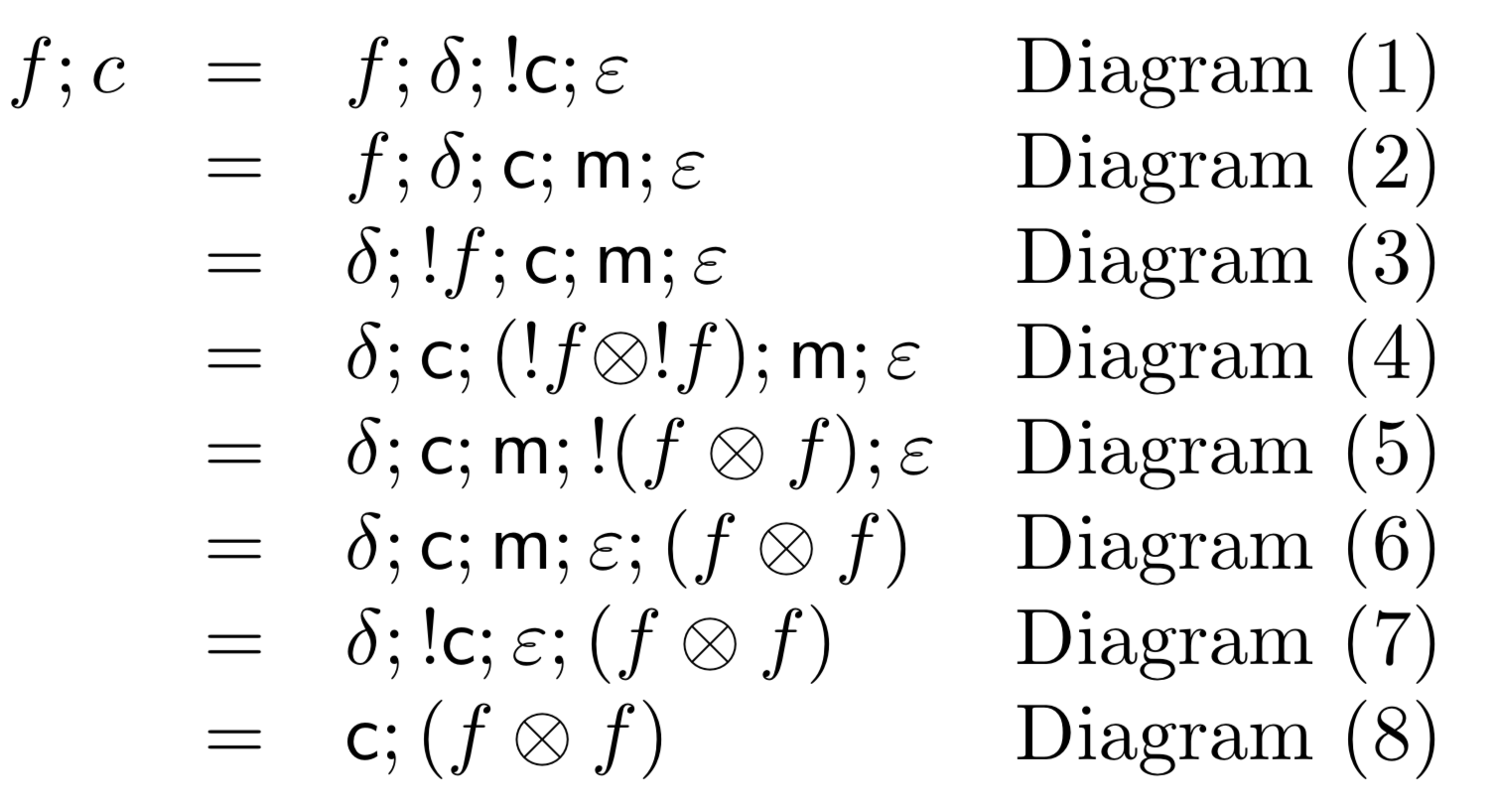 This was a really fun proof, but not at all obvious. Folklore results hinder scientific progress, and hinder new comers from progressing in our field. We need to be writing down these types of results so others do not have to! This is the point of research after all.

If anyone knows of a paper that writes this proof down, then I would like to know about it so I can cite it in future work. I will update this post with any citations I can find.

Updates: Jean-Simon Lemay has communicated to Damiano that this first appeared in a paper by Cocket, Seely, and Blute, but I have not had time to dig through their papers to get the precise citation yet.